Weak weak quenched limits for the path-valued processes of hitting times and positions of a transient, one-dimensional random walk in a random environment 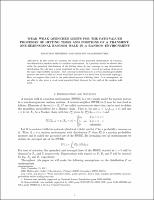 In this article we continue the study of the quenched distributions of transient, one-dimensional random walks in a random environment. In a previous article we showed that while the quenched distributions of the hitting times do not converge to any deterministic distribution, they do have a weak weak limit in the sense that - viewed as random elements of the space of probability measures - they converge in distribution to a certain random probability measure (we refer to this as a weak weak limit because it is a weak limit in the weak topology). Here, we improve this result to the path-valued process of hitting times. As a consequence, we are able to also prove a weak weak quenched limit theorem for the path of the random walk itself.