Population, Ethnicity and Confession in the County of Arad in the Eighteenth Century and Early Nineteenth Century 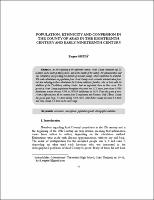 At the beginning of the eighteenth century, Arad County contained only 25 localities in the north of Mureş River, and in the middle of the century, the administrative unit was extended by incorporating two districts of Zarand County, which would then be abolished. We made calculations on population from Arad County in its extended administrative form, but also including in these calculations the Serbian militaries’ families, who, at least until the abolition of the Tisa-Mureş military border, had an important share in these areas. The growth of Arad County population throughout the period was 13.8 times, from about 15000 inhabitants around the year 1700 to 207039 inhabitants in 1828. From this point of view, Arad is different from all the counties from Transylvania and Partium. Only Sătmar County has grown quite large, 7.6 times during 1720-1828, while Bihor County increased 5.4 times and Cluj County 3.3 times in the same range.