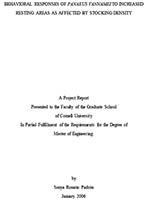 An observational study was constructed to determine the behavioral effects on Penaeus vannamei of shelf addition to densely stocked aquaria. Trials were conducted in a recirculating system at the University of Southern Mississippi?s Gulf Coast Research Lab in Ocean Springs, Mississippi. Initial studies focused on the addition of multiple stacked-shelf units into six low density (77 shrimp per square meter) rearing tanks. Observing zero shrimp occupancy on the stacked shelving units, two alternate scenarios were constructed. Long, single shelves made of either white corrugated plastic or standard black mesh nylon screen were introduced into tanks. Shrimp reaction to shelves was observed for four stocking densities: 77, 179, 407 and 623 shrimp per square meter. Shrimp density was increased during a five-day period and shrimp behavior was noted as either swimming, on shelf, or on floor in five-minute increments during hour blocks from July 6-9th, 2002. Increased stocking densities positively correlated with an observed increase of shrimp occupancy on single shelf units. Preference for mesh-shelf over solid-shelf units occurred at the highest stocking density of 623 shrimp per square meter.