A Store Yet Untouched: Speculative Ideologies in Eighteenth-Century English Literature 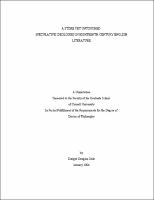 This dissertation explores the ways in which attacks on speculative practices articulated in the financial literature of the seventeenth and eighteenth centuries were revised and reformulated in the literary productions of eighteenth-century English fiction writers. The title of this dissertation derives from William Hazlitt?s remark that the ?past is?like money that is spent,? while the future ?is like a store yet untouched, and in the enjoyment of which we promise ourselves infinite gratification? (?On the Past and Future?). Hazlitt?s figuration of time as money refers us to an important historical connection between England?s revolutionized financial order and alterations in the individual?s relationship to futurity. The financial revolution, as P.G.M. Dickson famously styled it, brought the British a new sense of the individual?s control over his or her material destiny in the temporal order of things; and the challenge it posed to a Providentialist view of history was addressed and negotiated by countless literary texts of the period in explicit or implicit fashion. Rather than sidestepping the vexing theoretical problem of how a revolution could be said to exist independently of the discourse that names it so, this dissertation argues that the historically significant fictional discourses of the eighteenth century acted to mark the historical moment as one particularly interested in the status of the forward-looking (often explicitly financial) subject. Ascertaining how texts of this period established ethical distinctions between prudential foresight and ?scheming? offers a new way of understanding the development of eighteenth-century fiction as well as the broader cultural narratives from which those fictions drew energy and, indeed, a readership. The carving of ethical space for the speculative subject, one who was forward-looking without being either presumptuous or manipulative, is shown to be a central moral concern and literary opportunity for writers such as Daniel Defoe, Richard Steele, Alexander Pope, Eliza Haywood, Samuel Richardson, Henry Fielding, and Samuel Johnson.