History of the College of Veterinary Medicine
JavaScript is disabled for your browser. Some features of this site may not work without it.

History of the College of Veterinary Medicine 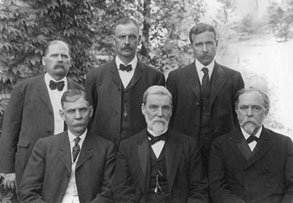 “Until he [Dr. James Law] began to teach at Cornell, no American college had ever regarded veterinary medicine as deserving a place in the college curriculum”. -- Cornell Board of Trustees Resolution, June 1908.

Publications in this collection focus on various aspects of the history and background of the College of Veterinary Medicine at Cornell University. It was founded in 1894 by Dr. James Law who served as the first dean.

Included are works by and about Dr. Law since his appointment as the first professor of veterinary medicine at Cornell in 1868, his efforts toward founding the New York State Veterinary College, and subsequent developments of historical interest leading to the present day.

The image shows the first 6 faculty of the College taken in June 1908. Dr. James Law is in the center of the front row.