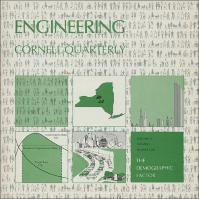 IN THIS ISSUE: Engineering for Decline: a Challenge in the Eighties /2 (New York State's new public service commissioner, Richard E. Schuler, who is also associate professor of environmental engineering and of economics at Cornell, writes about an issue that has emerged only recently in the United States: declining inner-city populations and accompanying problems in planning and designing public facilities.) ... Trying to Control Crime: Research on the Criminal Justice System /8 (Alfred Blumstein, a Cornell alumnus (Bachelor of Engineering Physics and Ph.D. in Operations Research), who is now a chaired professor at Carnegie-Mellon University, discusses scientific methods for projecting prison populations and assessing the effects of alternative crime-control policies.) ... Apportionment: Reflections on the Politics of Mathematics /16 (Various mathematical procedures??h significant political effects??e been proposed and used in apportioning Congressional seats among the states. The fascinating history of a timely topic is discussed by William F. Lucas, Cornell professor of operations research and industrial engineering, and David Housman, a doctoral candidate in applied mathematics.) ... Commentary: A Common Program with Distinction: An Inside Story /23 (Cornell's undergraduate engineering curriculum, recently revised after months of faculty debate, is explained by Associate Dean Malcolm S. Burton.) ... Register /27 ... Vantage: Sidelights of 1980-81 /33 ... Faculty Publications /38 ... Letters /43