Purification of the Metalloprotease of Listeria monocytogenes 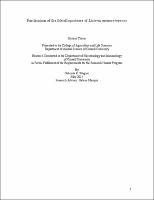 Listeria monocytogenes is a gram-positive bacterium and the causative agent of listeriosis, a food-borne infection. During infection, the bacterium invades host cells and lyses phagocytic vacuoles to gain access to the cytosol where it multiplies. One of the virulence factors involved in escape from vacuoles is a secreted zinc-dependent metalloprotease (Mpl). Mpl is made as a zymogen of ~55 kDa and is composed of a propeptide and a catalytic domain. Mpl maturation occurs by autocatalysis in a pH-dependent manner. To better understand the mechanism of Mpl autocatalysis, we aimed to purify Mpl for structure/function analysis. Mpl was purified in its natural host, L. monocytogenes, grown under conditions that favor the expression of Mpl, and the supernatant was recovered by centrifugation and filtration. Secreted proteins, including Mpl, were concentrated by ammonium sulfate precipitation, recovered by centrifugation, dissolved in water, and passed through a buffer exchange column to eliminate the salt. Mpl was purified by ion-exchange chromatography at pH 7.0, and eluted from the column at 500 mM NaCl. It was further purified via Flag-tag affinity chromatography. Fractions containing Mpl were identified by Western immunoblot with an anti-Mpl antibody, and Coomassie Blue staining of protein gels was used to verify purity. At the conclusion of these experiments, 4 nonspecific proteins in very small concentrations were found to co-purify with Mpl.