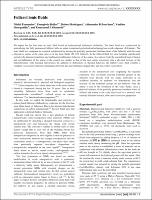 We report for the first time an ionic fluid based on hydroxylated fullerenes (fullerols). The ionic fluid was synthesized by neutralizing the fully protonated fullerol with an amine terminated polyethylene/polypropylene oxide oligomer (Jeffamine(R)). The ionic fluid was compared to a control synthesized by mixing the parially protonated from (sodium form) of hte fullerols with the same oligomeric amine in the same ratio as in the ionic fluids (20 wt% fullerol). In the fullerol fluid the ionic bonding significantly perturbs the thermal transitions and melting/crystallization behavior of the amine. In contrast, both the normalized heat of fusion and crystallization of the amine in the control are similar to those of the neat amine consistent with a physical mixture of the fullerols/amine with minimal interactions. In addition to differences in thermal behavior, the fullerol ionic fluid exhibits a complex viscoelastic behavior intermediate between the neat Jeffamine (R) (liquid-like) and the control (solid-like).