Sidney Cox Library of Music and Dance
JavaScript is disabled for your browser. Some features of this site may not work without it. 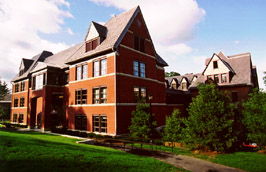 Located on the second and third floors of Lincoln Hall, the Sidney Cox Library of Music and Dance provides listening and viewing facilities, workstations, laptops, and wireless Internet access, as well as a variety of study spaces.

For more information go to the Music Library Home Page.