The Influence of Climate and Tectonics on the Geomorphology of the Western Slope of the Central Andes, Peru and Chile 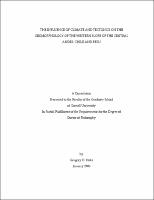 This thesis explores the geomorphic evolution of the western Andean mountain front with respect to climate and tectonics for the area between 10?S and 33?S latitude. Much of the area I studied lies within the Atacama Desert, the most arid environment known on earth today. The development of a disequilibrium (or polyphase) landscape between 18?S and 22?S with the youngest phase of landscape development dominated by deep canyons suggests a progresson through time toward conditions favoring the development and preservation of groundwater sapping features. I interpret the shift to be related to uplift of the adjacent Altiplano Plateau, with consequent reduction in precipitation on the western Andean slope. In support of this, an estimated 1000 m of post-10 Ma uplift of the central Andes is determined by modeling the former downstream projections of knick-point bounded river segments in the rivers draining the area between 18? and 22?S (Northernmost Chile). The impact of climate on landforms is explored in detail by the relationships between mean annual precipitation (MAP), slopes measured from a 90 m DEM, and erosion rates. At the scale of the entire mountain front, there is a significant correlation between average slope at the hillslope scale and the modern climatology of the western Andean Mountain front between 10? and 33?S latitude. Detailed examination of the distribution of slopes at the hillslope scale for eight distinct mountain front regions reveal the consequences of allochthonous versus autochthonous mountain front moisture sources. At Approximately 100 mm/yr mean annual precipitation, slope distributions begin to reflect the dominance of fluvial landscapes. Reconstruction of a regionally extensive ~ 10 Ma depositional surface permitted the determination of erosional mass loss for the rivers that drain the western mountain front. Erosion rates were determined for 2 areas, on in a zone with a pronounced vertical precipitation gradient (18?S-22?S) and the other in an area with a strong latitudinal precipitation gradient (25?S-29.5?S). Landform data for the southern region show strong correlations between MAP, average slope and erosion rate. The northern area does not have strong correlations most likely due to the strong impact of allochthonous water sources.