The Rau Plow Model Collection at Cornell University and the Evolution of Plow Design
JavaScript is disabled for your browser. Some features of this site may not work without it. 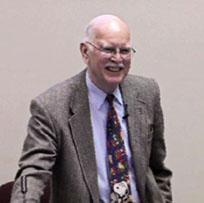 This Cornell Associate of Professors Emeriti lecture was presented by Gerald E. Rehkugler on April 21, 2011. He was introduced by J. Robert Cooke.

Rehkugler traces the 5,000 year evolution of the design of the moldboard plow using scale models of the Rau Collection that was acquired by Cornell’s first president, A.D. White when he traveled in Europe in 1868. White presented these to the university’s founder (and chair of the Board of Trustees), Ezra Cornell. Rehkugler brings the plow story full circle to the ascendancy of minimum tillage and the diminished usefulness of the moldboard plow that had played such a prominent historical role for humankind. He uses the Rau models to illustrate the significant stages in the evolution in plow design.

Namely, early plows were simple, one piece wooden tools that later evolved into ones with metal points, handles, plow soles, knife coulters. Interchangeable parts, improved materials and the use of mathematics to study moldboard shape characterize the mature phase of plow design.

The streaming video is openly accessible at: http://www.youtube.com/watch?v=SDryuP0jqxw.