SIMULATION OF THE INTERACTION BETWEEN PROTEINS AND A CHARGE-NANOPARTTERNED SURFACE 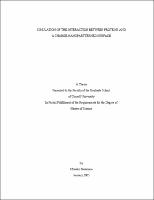 The characteristics of protein recognition and actuation on a silicon device are investigated using Dynamic Monte Carlo simulations with both a simple cubic lattice model and a high-resolution lattice model. The surface of a model device has a nanoscale electrostatic charge distribution produced by charged nanocrystals embedded into the model device. Thermodynamic and structural quantities of the protein-surface interaction are calculated using the Miyazawa-Jernigan contact energies for the simple cubic lattice model, and the Skolnick-Kolinski interaction scheme for the high-resolution lattice model. A parallel tempering method is applied in the simulation. The results indicate that the B1 domain of Protein G (1gb1) and two mutants of 1gb1s with the same mass, isoelectric points, and amino acids can be separated on the surface based on binding affinity differences. The differences are caused by the different surface charge distributions of the proteins. A protein with a more disperse charge distribution along the sequence has a lower affinity, while a protein with a more segregated charge distribution has a higher affinity. The segregated charge allows the protein to be denatured further by the generation of stronger Coulombic forces between the protein and the charged nanocrystals. This suggests that charge-patterned surfaces may be able to differentiate similar proteins that are usually difficult to separate by conventional methods. It is also demonstrated by the simulation that proteins can be actuated by switching and moving the charges of the nanocrystals. This result suggests that if fast reprogrammability of charges is realized, the device could be used to actuate a single biomolecular in a controllable manner. The simple cubic lattice model allows us to predict thermodynamic properties with ease, while the high-resolution lattice model enables us to estimate realistic protein structures. A combination of the two methods will be a useful tool to obtain thermodynamic, kinetic, and structural characteristics of protein adsorption on model devices.