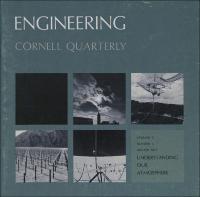 In this Issue: Our Outermost Atmosphere: Examining Some Mysteries /2 (Auroral displays and radio blackouts are the observable indications of activity in the ionosphere, a region whose phenomena are discussed by Cornell's Neil M. Brice, associate professor of electrical engineering. Professor Brice, an authority in the general area of atmospheric phenomena, is spending the current academic year in Washington, D.C., as program director of the solar-terrestrial physics area for the National Science Foundation.) ... Incoherent Scattering: Radar Experiments in the Ionosphere /11 (Both science and technology are essential to research in the upper atmosphere, and Donald T. Farley, professor of electrical engineering at Cornell, considers both the scientific and the technological aspects of his speciality in his article on incoherent scattering. Professor Farley has participated in experimental work in this field for the past decade, almost from the beginning of the development of radar as a powerful tool for ionospheric studies. He has worked at both of the two major radar observatories in the world, first at Jicamarca in Peru and subsequently at Cornell's facility in Arecibo, Puerto Rico, where he maintains an active research program.) ... Vantage /23 (Design projects are an essential part of the Master of Engineering professional degree program at Cornell, and are frequently a focal activity of undergraduates during their senior year. Some of the recent projects, most of them sponsored by industrial companies or governmental agencies, are illustrated in this photo feature.) ... Faculty Publications /29 ... Editorial /32