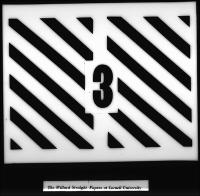 The diaries vary in character and extent. The early books are not day-by-day records but occasional comments on his experiences, bits of self-analysis, and attempts at fiction based on his observations. Later Straight often pasted in his diary carbon copies of detailed letters he wrote to friends. The diaries for the Russo-Japanese War period also contain a number of sketches. In Mukden he kept a fairly systematic diary, recording his activities and naming his visitors and associates. There are occasional gaps, and some entries are very brief.