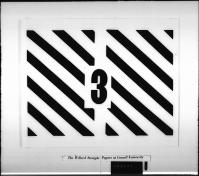 Most of the correspondence in late 1917 relates to the War Risk Insurance project Straight was assigned to administer in France. Letters document a controversy with Washington officials over details of his plan of operation. A letter from Shanghai on November eighth concerns Straight's business interest in China and refers to his proposal to buy back his old Peking house. Croly and A. W. Fiedler, Straight's secretary, reported on home-front matters in 1918, and Straight wrote frequent and detailed letters to his wife. In early February he wrote recommendations for members of his insurance staff, as he prepared to leave the project and enroll in the army staff college at Langres. On 13 February he complained to James A. Logan that the army was "controlled by men too long a part of the regular army peacetime machinery, not flexible enough ... to solve wartime problems of transport and communication." On the same day he wrote his wife that he had come to believe in universal service and "a changing, not a permanent, personnel." A memorandum from General William Mason Wright of the Fifth Army Corps on 29 July 1918 enclosed several officers' comments on the liaison pamphlet Straight prepared. The last word from Straight is a long cable to Croly on November seventh urging sup¬port for Wilson and the League of Nations. Straight died of pneumonia in Paris on December first, a victim of the 1918-1919 influenza pandemic. The remainder of the correspondence is addressed to Mrs. Straight, though most of it concerns him. First are a group of letters addressed to her before his death, 1910-1918. These are followed by a list of callers at the Hotel Crillon at the time of Straight's death and funeral. The last items on the reel are a group of cables and telegrams sent in December and the first of some 800 letters of condolence.