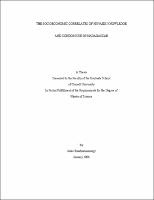 We estimate the determinants of HIV/AIDS knowledge and related behavior (use of condoms)among women in Madagascar, a country where prevalence remains low but conditions are ripe for a rapid increase in infections. In both rural and urban areas, more educated and wealthier women are more likely to know about means of preventing infection, less likely to have misconceptions about transmission, and more likely to use condoms. Community factors such as availability of health centers and access to roads also lead to greater HIV knowledge. However, most of the large rural-urban difference in mean knowledge is due not to location per se but to differences in schooling and wealth; rather than simply being geographically targeted, AIDS education efforts must be designed to target and be understood by uneducated and poor subpopulations.