Violence in Peru: Performances and Dialogues 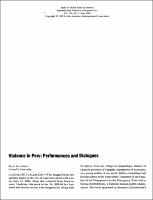 I wish not only to influence my readers' perceptions of the political violence that has shaken Peru in the last decade and a half, but also to transform the relationship of researchers to such events and the rules of academic discourse about such events. The protest songs and art will not be analyzed in terms of subaltern art and hegemonic texts or in any of the usual oppositions such as traditional-modern, but rather in terms of hybridization in the exchange of ideological and cultural goods.