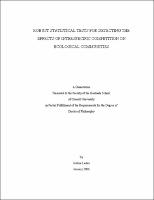 For seventy years ecologists have debated to what extent competition affects the composition of ecological communities. At one extreme, species have been proposed to assemble independently of each other, while at the other extreme, competition and other interspecific interactions have been proposed to account almost solely for the composition of communities. Although the debate bears broadly on applied and basic ecology, it has been challenging to resolve. The most practical approach toward resolving the debate has been null model testing. The testing begins by assuming a null hypothesis that is reflective of an absence of competitive effects, which is then used to make a statistical prediction about the observed data. If observations are inconsistent with the prediction, then the null hypothesis is rejected, and effects of competition are inferred. Unfortunately, as I show here, all existing null model tests are biased or non-robust. Although both qualities are problematic, the non-robustness is particularly troubling, because it means that when assumptions of the tests cannot be verified ? as is usually the case ? the tests will incorrectly indicate competitive effects unacceptably often. Thus, the tests are unreliable. To fix the problem, I derive robust tests. Letting i and j denote the ith and jth colonists to arrive at a site, respectively, and W(i,j) the event that i and j belong to the same ?unit? (e.g., functional group, genus), I derive how partitions of colonists into units will be distributed if for all i and j, W(i,j) is conditionally independent of whether i and j share unit membership with the other colonists. Because the distribution can be derived without parametric assumptions, it can be used to test robustly for competitive effects. I conclude by applying one of the tests to seven large data sets. In no cases does this test suggest effects of competition, although it does sometimes suggest effects of other interspecific interactions (e.g., facilitation). Overall, the predicted distribution accounts for over 95% of the variation in frequencies of partitions. Hence, the results suggest that although interspecific interactions may discernibly affect the composition of communities, those effects are generally minor.