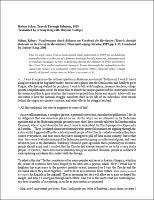 This excerpt comes from a book-length study published in 1919, by an Austrian journalist who was the son of a famous Austrian Social Democrat. Scheu traveled around the language border in Bohemia during the summer of 1918, just before the Great War ended and much changed. Terms that might be unfamiliar to the American reader are explained within brackets. Other editorial notes consist mostly of factual corrections to Scheu?s account. (Abstract prepared by Jeremy King of Mt. Holyoke College)