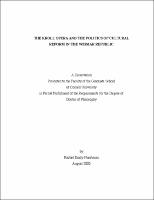 THE KROLL OPERA AND THE POLITICS OF CULTURAL REFORM IN THE WEIMAR REPUBLIC Rachel Emily Nussbaum, Ph.D Cornell University, 2005 This dissertation deals with changes in cultural policy during the Weimar Republic and how they affected the structure of the German opera public. I pay special attention to the role of theater-goers' organizations such as the Berlin Volksb?hne, who formed a major part of the audience for Weimar Germany's best-known experimental opera, the Kroll Opera (1927-1931). The expansion of the opera public to include social groups who had previously been excluded was here combined with an attempt to reform opera aesthetically, to create an "everyday opera" which would do away with kitsch and make opera a viable art form capable of speaking to a modern audience. The ideas of the Volksb?hne centered on community (Gemeinschaft) which involved using the theater as a way of uniting German society. In this way, they lined up with conductor Otto Klemperer's plans for an opera representative of the new republican state form. Although the opera was forced to close in 1931, I argue that it nevertheless managed to create its own public far beyond the elites who usually attended opera. The Kroll is an example of the transformation of the idea of the Bildungsb?rgertum , or the educated bourgeoisie, in the1920s. It has often been argued that this was an outdated idea in the Weimar era. However, it had considerable power at the time. Avant-garde critics who supported Klemperer's idea of an opera stripped of spectacle were actually part of the Bildungsb?rgertum due to their continued belief in the power of culture to unite disparate groups within German society. However, as the opera audience actually expanded to include the working class and white-collar workers, conflict surrounding the idea of Bildung (self-formation) was inevitable. What would have to change about operatic culture? Its form, its content or simply its price structure? The decline of the old bourgeois culture which had supported opera before 1914 meant that its heritage was placed in question. Would "an opera for every day" still be opera? My sources include the files of the Prussian state theater administration; the files of the Ministry of State; the records of Volksb?hne annual meetings, as well as the organization's published journals; and contemporary newspapers and music journals.