THE AMERICAN COMMISSION FOR THE PROTECTION AND SALVAGE OF ARTISTIC AND HISTORIC MONUMENTS IN WAR AREAS: HISTORIC PRESERVATION IN EUROPE DURING WORLD WAR II 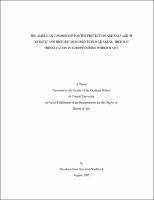 The subject of this thesis is historic preservation during times of armed conflict. Specifically, my purpose here is to evaluate a single effort in a discrete moment in time at a specific place: the American efforts during World War II to protect the historic buildings of Europe. To do so, the work of two civilian agencies is examined: the monuments subcommittees of American Defense-Harvard Group and the American Council of Learned Societies. Both groups were charged with sifting through the vast body of information on Europe?s cultural patrimony and rendering it usable by the Allied governments. These groups sent the information they gathered on to the American Commission for the Protection and Salvage of Artistic and Historic Monuments in War Areas, a Federal clearinghouse that, in turn, compiled the information and disseminated it to its military components serving in the various theaters of war. The final recipients of this information were the famed Monuments, Fine Arts and Archives soldiers of the United States Army. On their shoulders fell the responsibility of protecting the sweeping cultural heritage of Europe from destruction. Failing this lofty goal, they were charged with stabilizing damage to monuments where possible and recording the destruction where there was nothing left to save. To evaluate the efficacy of this program, an examination of the city of Frankfurt am Main, Germany, is offered as a case study. Frankfurt was chosen for two reasons. First, it was typical. It was not a national capital like Berlin, Rome, or London, and thus was not rife with symbolic meaning as capital cities are. It was also ordinary in most other ways?in terms of population, history, built environment?and is arguably representative of European cities. The experiences of this city during World War II may fairly be extrapolated to those of others, not just in Germany but in other European nations as well. Frankfurt was also selected because it was the subject of a unique post-war photographic and textual survey of its historic buildings, now in the collections of the National Archives in suburban Washington, D.C. This rich resource has never been systematically analyzed. My final assessment of these historic preservation efforts is fairly straightforward. I contend that no degree of military planning, political wherewithal, or plain good intentions would likely have spared much of the destruction suffered by Europe?s historic architecture. Even with landmarks earmarked for protection, the technology available during World War II was insufficient to guaranty against unintended damage (?collateral damage? in today?s parlance). The ?strategic, precision? bombing so often alluded to at the time, though strategic in bringing about the end of the war, was rarely precise, and many historic buildings suffered as a result. My context here is historical. Yet this topic is as relevant today as it was in the 1940s. In spite of much-ballyhooed American ?smart? armaments and the effortless removal of desired targets with ?surgical? precision, wars still create confused, random environments. Unintended events with irreversible consequences still occur, and buildings earmarked for protection are destroyed. Adding to this confusion is a global information infrastructure, which allows news?and propaganda?to travel instantaneously to the far corners of the planet and shape international public opinion. Realizing the strategic potential in this, an enemy, even a militarily inferior one, can publicize the destruction of a monument (whether legitimately destroyed by its enemy or self-inflicted (like Nero?s Rome or Hitler?s Reichstag allegedly were)), and garner support while portraying the enemy as latter-day barbarians. And in this way, the tide of war can be shaped in ways that have little to do with military superiority.