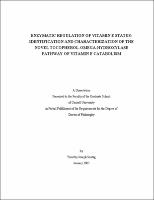 Tocopherols and tocotrienols all possess to varying levels the vitamin E activity of alpha-tocopherol, the most bioactive form of the vitamin in vivo. alpha-Tocopherol is the most abundant vitamer in vivo, potentially explaining its higher bioactivity. This is despite higher dietary levels of other vitamers. The preferential retention of alpha-tocopherol appears to be at the level of elimination. Urinary metabolites of tocopherols, with the phytyl tail truncated to a three-carbon carboxylated moiety, were reported previously. The goal of this work was to elucidate the pathway(s) by which these metabolites are formed. Incubations of tocopherols in hepatocyte culture produced all expected intermediates in the predicted pathway of catabolism of vitamin E. This pathway involves omega-hydroxylation of a terminal methyl group of the phytyl tail, followed by step-wise removal of two or three carbon units by a omega-oxidation mechanism. Analysis of microsomal enzyme activity led to the elucidation of CYP4F2 as the major P450 involved in the initial omega-hydroxylation reaction. Substrate-specificity of this enzyme was high, with activity toward gamma-tocopherol being 10-fold greater than toward alpha-tocopherol. Sesamin, known to raise plasma gamma-tocopherol to levels near those of alpha-tocopherol in vivo, was a potent inhibitor of this enzyme. Together, these data supported the hypothesis that the omega-oxidation pathway is an important regulator of vitamin E status. Kinetic analyses revealed key features of the tocopherol molecule which govern the affinity and activity of the enzyme toward its substrates. These studies also revealed an allosteric nature of CYP4F2. The finding that alpha-tocopherol is a positive effector of gamma-tocopherol metabolism may explain why supplementation with alpha-tocopherol decreases plasma concentrations of non-alpha-tocopherols. Tocotrienols differed from tocopherols in their effects on lateral and rotational mobility of the microsomal membrane components, and inhibited the activity of membrane-bound P450 enzymes, possibly through inhibition of interaction of components of the cytochrome P450 multi-enzyme complex. These effects may play a role in the cytotoxic nature of the tocotrienols and highlight the importance of the tocopherol-omega-oxidation pathway in minimizing their concentration in biomembranes.