The Consequences of the 1771 Floods in the City of Arad 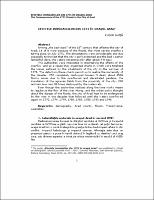 Among „the bad years” of the 18th century that affected the city of Arad, 14 of it were because of the floods, the most severe overflows taking place on July 1771. The devastations were considerable and due especially to the fact that the city wasn’t protected and the bad weather lasted full days, the waters retracting only after about 7-8 days. The authorities were interested in stocktaking the effects of the overflow and as a cause they organized charts in which were totalized the losses suffered by the inhabitants of the city in the summer of 1771. The data from these charts permit us to realize the immensity of the disaster: 252 completely destroyed houses, 9 dead, about 8500 florins losses due to the overflowed and devastated gardens, the inundation of the agrarian fields from the proximity of the city, 200 animals drowned, 88 hives destroyed by the waters etc. Even though the authorities realized along the time works meant to regularize the flow of the river Mureş, and the urban policy thought about the danger of the floods, the city of Arad kept to be endangered by the river in the decades that followed until the waters overflowed again in: 1772, 1774, 1779, 1780, 1783, 1785, 1793 and 1799.