Topics In Model Building And Phenomenology Beyond The Standard Model 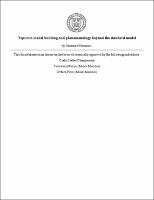 The origin of electroweak symmetry breaking is about to be explored by the LHC, which has started taking high-energy data this spring. In this thesis, we explore several theories proposed to extend the standard mode (SM) of particle physics and their phenomenological consequences for the LHC. First we show that there exists an anomaly-free Littlest Higgs model with an exact T-parity by explicitly constructing such a weakly coupled UV completion. We show that an extended gauge and fermion sector is needed and estimate the impact of new TeV scale particles on electroweak precision observables. We also give both a supersymmetric and a five-dimensional solution to the remaining hierarchy problem up to the Planck scale. We then examine the feasibility of distinguishing a fermionic partner of the SM gluon from a bosonic one at the LHC. We focus on the case when all allowed tree-level decays of this partner are 3-body decays into two jets and a massive, invisible particle. We show that the dijet invariant mass distributions differ significantly in the two models, as long as the decaying particle is substantially more massive than its invisible daughter. Finally we analyze the theory and phenomenology of anomalous global chiral symmetries in the presence of an extra dimension. We propose a simple extension of the standard model in 5D whose signatures closely resemble those of supersymmetry with gauge mediation.