Innovation And Identity In Seneca Iroquois Lithic Debitage: Analysis Of Stone Tools From The White Springs And Townleyread Sites, Circa 1688-1754 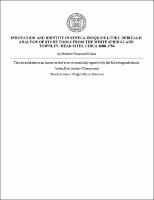 This thesis is concerned with the chipped stone artifacts found at two Seneca Iroquois sites, excavated by Dr. Kurt Jordan of Cornell University. Both of these sites are located at the northern end of Seneca Lake, in the Finger Lakes region of upstate New York. The first of these sites, by historical chronology, is White Springs, occupied from 1688-1715, where the Senecas lived in longhouses behind a palisaded wall. The second site, Townley-Read, was occupied from 1715-1754, and is one of six sites which represent the dispersed community of New Ganechstage, where residents lived in smaller "short longhouses," as previously described by Jordan (2003, 2008). Conventional wisdom has de-emphasized stone tool use by indigenous peoples following initial European contact, assuming that stone tools are rapidly replaced by functionally-equivalent metal counterparts. At both of these sites, however, the lithic assemblages indicate that there was extensive stone tool use by the Senecas well into the 18th century, despite two centuries of sustained trade with European colonists. This paper will investigate the ongoing significance of stone tool use in the lives of Seneca people. By using multiple scales of analysis, including diahcronic, regional, and household scales, a more complete view of Seneca stone tool use is produced. Formal stone tool forms at the two sites are rare, and most likely played a secondary role to the use of expedient stone tools. Over 10,000 pieces of debitage were examined and cataloged with regard to several different variables, including morphology, dorsal flake scarring, and size, in order to provide aggregate statistics for each site and locus. Those few formal tools were also noted and analyzed, as well as the chipped stone tools (gunflints) which were introduced by Europeans. Using this methodology, patterns have been demonstrating variation between the sites and loci, indicating ongoing change and innovation in the assemblages, as reduction patterns were altered and debitage utilization intensified at Townley-Read. These stone tools are discussed in the end with the remainder of artifacts found at the site in order to illuminate the possible reasons for these choices, including as a result of and as a reaction to historical and political-economic developments, such as altered relationships with neighboring cultures and redesigned routes for the fur trade. Functionally equivalent tools made of material classes of European origin provide complementary contextual information, instead of an adversarial acculturative replacement. This serves to remind that stone tools were part of an extremely complex set of historical and socio-economic particulars, and were the product of informed, innovative decisions by the Seneca Iroquois.