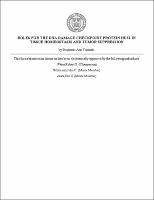 Cancer is aberrant cellular proliferation that arises due to mutations in growth regulatory genes. DNA damage checkpoint proteins are thought to suppress tumorigenesis by preventing mutation accumulation and by inducing senescence in response to oncogenic stimuli. However, checkpoint proteins may be required for cancer cells to survive the increased stress associated with transformation. There are two main mammalian DNA damage checkpoint pathways, the Atm and Atr pathways. While mutations in the Atm pathway results in increased tumorigenesis, roles for the Atr pathway in tumor development are less well understood, in part because deletion of any component of this pathway, including Hus1, results in embryonic lethality. Hus1, a component of the Rad9-Rad1-Hus1 heterotrimeric, PCNA-like sliding clamp, is recruited to sites of DNA damage for optimal phosphorylation of the Atr target Chk1. To investigate the physiological function of the Hus1-dependent Atr pathway, our lab developed two systems that bypass the severe phenotypes associated with germline Hus1 inactivation. A conditional allele can be used for tissue specific deletion of Hus1 in adult mice. I have utilized this approach to identify an essential role for Hus1 in the survival and proliferation of mammary epithelium. Notably, Hus1 inactivation in the mammary gland did not result in tumorigenesis, even when combined with p53 inactivation. p53 deficiency exacerbated the effects of Hus1 loss, resulting in increased cell death without compensatory proliferation, revealing a novel role for p53 in mammary gland tissue regeneration. As a second approach, our lab developed an allelic series in which mice express incrementally reduced Hus1 levels. I used this system to investigate how partial Hus1 impairment affects transformation in cell culture and impacts skin papilloma formation. Reduced Hus1 expression impaired cell transformation by activated oncogenes as measured in cell culture assays. Mice with Hus1 impairment developed significantly fewer and smaller papillomas in a twostep skin carcinogenesis protocol. These results may be due to an inability of Hus1deficient cells to survive the stresses of neoplastic proliferation due to insufficient genome maintenance. These results suggest that reduced Hus1 levels impair tumor development and that the Atr-dependent pathway may be exploited for cancer therapy.