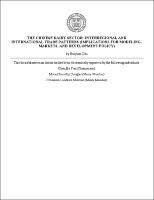 Rising values of Chinese dairy imports1 in recent years generated studies exploring the market potentials for future importing. These studies typically treat the country and its population as uniform and undifferentiated, with homogeneous consumption and production patterns, ignoring the fact that demographic and geographic features are very different across China. At the same time, China's milk production is expanding rapidly, and unevenly in the last 20 years.2 The supply of milk, a highly perishable commodity, makes the geographic location of production and spatial price differences important factors in defining the availability of milk to populations across the country. The scenarios of inter-regional trade of milk powder and other storable dairy products across China are emerging. This paper is devoted to building an inter-regional dairy trade model for China, and predicting its dynamic internal dairy trade flow under free trade scenario. This paper updates and summarizes dairy product consumption and supply trends in China, and divides China in four regions. Panel data is used to check consumer and producer responses in different regions, and, at the same time, China's net import value of milk (Condensed + Dry + Fresh) was US $288 million in 1992 (Zhou and Novakovic, 1996), while in 2004; it reached US $515 million by FAO data. 2 In 1990s, China's milk production was considered as a small-size in the world; in 2005, China was ranked number seven among the major milk producing countries, with nearly 20 million tons of total milk production. 1 serve as a test for the hypothesis that China's dairy consumption preference and production patterns are different across the country. Partial equilibrium is the framework used to build the inter-regional dairy trade model. Our results show that in the major milk producing of Northwestern China producers will suffer most and local consumers may not benefit that much. Eastern China, the richest area, is not benefiting as much from free trade since its high income consumers are not that price sensitive. This region will continue to be the largest importer among the four regions. Inland China and Western China are less price sensitive in production but more price responsive in consumption. With price reduction under free trade, these regions gain more and a free trade policy will stimulate the imports in these two regions.