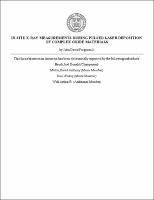 Complex Oxides possess a vast range of materials properties that will allow them to have a lasting impact on device architecture. To incorporated thin films of complex oxides into devices, a fundamental understanding of the mechanisms involved with thin film nucleation, growth, and interface formation must be achieved. For many complex oxide researchers, the deposition technique of choice is pulsed laser deposition (PLD). Our PLD chamber, installed at the G3 hutch in the Cornell High Energy Synchrotron Source, was specifically designed to study the growth kinetics during deposition. Chapter 1 of this thesis provides an introduction to complex oxide materials and pulsed laser deposition. Chapter 2 describes the x-ray scattering techniques used to study the thin film surface kinetics throughout this thesis. Chapter 3 presents a novel, in situ, x-ray scattering study of the PLD of the prototypic system: homoepitaxial SrTiO3 001 . The data provides a direct measurement of island nucleation, aggregation, and coarsening during PLD. Detailed analysis of these data lead to quantitative measurements of both in-plane and downhill diffusion. The same diffusion rate is found for these two processes, suggesting that the Ehrlich-Schwoebel barrier for downhill diffusion is negligible. This technique significantly increases the time resolution over other methods of measuring surface diffusion, such as scanning tunneling microscopy. In Chapter 4, we apply the methodology of Chapter 3 to a heteroepitaxial system: LaAlO3 on SrTiO3 001 . This materials system has received considerable attention in the literature due to the formation of a quasi-two-dimensional electron gas at the interface [1]. Conceptually, one might expect diffusion processes of the first monolayer, i.e. LaAlO3 on SrTiO3 , to differ from those of subsequent monolayers that involve diffusion of LaAlO3 constituents on the LaAlO3 film. We therefore measure the activation energy for diffusion as a function of the number of heteroepitaxial monolayers deposited. We find that the activation barrier for in-plane diffusion of LaAlO3 on SrTiO3 is larger than that for downhill diffusion of LaAlO3 to the SrTiO3 substrate. Additionally, we show that the downhill diffusion barrier is further decreased after the second LaAlO3 monolayer. In Chapter 5 we use in situ x-ray diffraction in a different configuration: as a probe to detect phase transformations at burred films. This chapter reports on the discovery of a new method to form brownmillerite structures in thin films of four different manganite materials: La0.7 Sr0.3 MnO3 , Pr0.7 Ca0.3 MnO3 , La0.7 Ca0.3 MnO3 , and LaMnO3 . These pseudomorphic, single crystal brownmillerite films form epitaxially on the most commonly used complex oxide substrate, SrTiO3 001 . The method involves the epitaxial deposition of an oxygen getter material (SrTiO3[-][delta] or LaAlO3[-][delta] ) on the manganite film. The getter layer removes oxygen from the buried manganite film, and when a critical thickness is reached, the buried manganite film phase transforms into an ordered brownmillerite structure. A provisional patent was provided for this technique1 . Chapter 6 provides the closing remarks, as well as suggesting future directions for the PLD/ x-ray diffraction experiment. "Epitaxial Getter Layer for a Complex Oxide Brownmillerite Phase Transformation in Maganite Films." U.S. Patent Application #6129690 (2010) 1