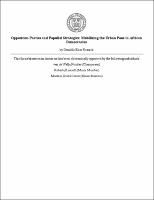 When and why do the urban poor in African democracies support opposition parties? Given that Africa has the world's highest urbanization rates and is experiencing an expansion in urban poverty, the region's urban poor increasingly represent a key constituency for electoral mobilization. Yet, opposition parties within the region have exhibited differential success at garnering votes from the urban poor. Based on the cases of Senegal and Zambia, this study argues that opposition parties that employ a populist strategy are more likely to win support from the urban poor than parties that employ alternative modes of mobilization. A populist strategy is characterized by the combination of an anti-elitist discourse and a policy message firmly focused on social inclusion, a charismatic leader who professes an affinity with the under-class, and the targeting of election campaigns in low-income urban areas. The advantage of a populist strategy is that it provides greater differentiation than the myriad of purely personalistic parties within the region and greater congruence with the policy priorities of the urban poor, including service delivery, jobs, and housing. The argument is based on a novel set of primary data collected from 400 informal sector workers in Dakar and Lusaka, in-depth interviews with slum dwellers, and semi-structured interviews conducted with political elites. Using both qualitative and quantitative methods, this data illustrates the different modes of mobilization used by various parties in these two countries and shows why a populist strategy in particular generates the most support from the urban poor. Furthermore, the data allows for the testing of alternative hypotheses for the urban poor's voting behavior: 1) vote-buying, 2) ethnic alignments, 3) retrospective economic voting, and 4) associational membership. The second part of the study examines when an opposition party will adopt a populist strategy with the urban poor. A populist strategy is alienating to other voters, such as rural residents whose support is still necessary to win national elections in most African countries. As such, a populist strategy is only feasible if an opposition party can mobilize a segment of rural constituents through appeals to a politically salient ascriptive identity. In such cases, an opposition party can form a minimum winning coalition that consists of the urban poor, to whom populist policies are directed, and a segment of rural voters, who provide sufficient votes to win electoral majorities. Overall, the study emphasizes how demographic and socioeconomic trends intersect with party strategizing and voting behavior. Furthermore, the study holds important implications for democratic contestation and consolidation in Africa, scholarship on party-citizen linkages, and cross-regional comparisons of the evolution and manifestations of populism.