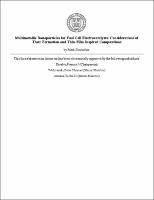 As part of collaborative efforts to develop new materials for use in polymer electrolyte membrane fuel cells, techniques for the high throughput synthesis and evaluation of thin films have been developed. These studies have revealed several multimetallic systems (both disordered alloys and ordered intermetallics) that are potential candidates for improved anode and cathode electrocatalysts. However, if those complex metallic materials are to be used as fuel cell electrocatalysts, they must be prepared as high surface area nanoparticles, typically as small as 3 to 5 nm in diameter. This dissertation describes efforts to understand intermetallic nanoparticle formation, and an example of preparing one of those promising thin film compositions as nanoparticles. Intermetallic PtPb is known to be an active anode electrocatalyst for formic acid oxidation and is much less sensitive to poisoning by CO and sulfur-containing compounds than the typical Pt catalyst. Solution-phase synthesis of this compound from organometallic precursors co-reduced via sodium naphthalide has produced nanoparticles that retain this activity, and varying reaction conditions provides insight as to how they form. Hydrocarbon adsorption is shown to be a likely inhibitor of intermetallic nanoparticle formation. Single- and double-potential step chronoamperometry methods are also used to investigate the first step of this synthesis- the rates at which the metal precursors are reduced and dissociate in solution. Under the assumptions of the electroanalytical measurements, the coreduced precursors do appear to reduce near the same rate. A promising thin film composition for oxygen reduction is palladium alloyed with tungsten and vanadium. Results are shown for the synthesis of ternary alloys near the composition Pd0.88W0.6V0.06 as nanoparticles which retain some of their oxygen reduction activity from that of the initial thin film used in the screening protocols. Powder x-ray diffraction (pXRD), electron microscopy (SEM and TEM), energy dispersive x-ray spectroscopy (EDS), and rotating disk electrode (RDE) experiments serve as the primary means of characterizing these nanoparticle catalysts.