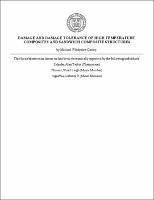 The first part of this dissertation examines application of polyimide matrix composites in severe hygrothermal environments. In particular, this work focuses on prediction of blistering and delamination of moisture-saturated graphite/polyimide composites due to rapid temperature heat-up. Two new experimental test methods are developed to determine initiation of blistering and delamination in laminates for a range of heating rates, moisture saturation levels, and extent of internal damage. The first method determines the onset of steam-induced blistering, or void formation, in initially undamaged specimens by monitoring their expansion during a ramped temperature increase. The second method involves testing of moisture-saturated composite specimens with pre-implanted circular delaminations. In these experiments, a set of hightemperature transverse extensometers are used to measure deformation of the delaminated region and determine the onset of delamination growth. For each method, a numerical hygrothermal-mechanical model is developed and implemented to predict internal steam pressure at onset of damage. In the case of steam-induced delamination, the internal pressure calculation is combined with linear elastic fracture mechanics to predict onset of delamination growth. Both studies demonstrate that there is a direct competition between initiation of blistering and onset of delamination growth during a hygrothermal cycle. This study suggests that there exists a critical flaw size below which blistering is likely to occur and above which delamination growth is a preferred mode of failure. The second part of this dissertation describes a combined experimental and computational effort to investigate damage tolerance of sandwich composite materials to barely visible impact damage. The experimental investigation focuses on sandwich panels with various combinations of thin-skin, quasiisotropic, carbon/epoxy face sheets and low density aluminum honeycomb cores. The impact damage is induced in test specimens using quasi-static indentation with spherical indentors. The damage tolerance is measured using a compression after impact test. The evolution of impact damage and ultimate failure during compression is visualized using a shadow Moir´ technique. The e observed failure is typically due to dent deepening, delamination buckling and growth, compressive fiber failure, or any combination thereof. The residual compressive strength data demonstrate sensitivity to type of face sheet layup, core thickness and density, extent of initial indentation damage, and observed mode of failure. Based on the experimental results, a numerical simulation of the quasi-static indentation and compression after impact experiments is carried out in the frame work of the finite element method. To simulate the process of indentation and dent growth during compression, two distinct honeycomb core models are implemented. Additionally, a progressive, intra-laminar, failure model is implemented to simulate the fiber failure during compression. A comparison between experimental data and numerical results reveals that explicit modeling of honeycomb core geometry provides accurate prediction of damage resulting from quasi-static indentation. Moreover, the simulation of compression after impact successfully captures failure due to unstable indentation growth and compressive fiber failure; however, the model largely overestimates the residual strength predictions. The inaccurate strength predictions illustrates a need for an improved modeling methodology that incorporates simulation of the initiation and evolution of inter-laminar delaminations.