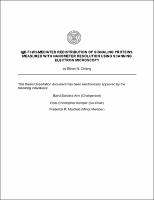 In this work, we use fluorescence and electron microscopy techniques to probe the microscopic and nanoscopic functional heterogeneity of the plasma membrane in RBL-2H3 cells. Using patterned poly (acrylic acid) (PAA) polymer brush surfaces, we explored the effects of surface chemistry and topography on cell-surface interactions. While PAA is reportedly cellrepellent, we find that micro-patterned PAA arrays promote cell adhesion and initiate robust cellular responses, including protein reorganization and cytoskeletal remodeling. We then demonstrate that these properties can be 'tuned' by increasing the size of brush regions (surface becomes more cellrepellent) or reducing brush thickness (prevents cytoskeletal remodeling). By modifying the arrayed PAA brushes with ligands that bind specifically to IgEbound Fc[epsilon]RI, we were able to stimulate cells with micron-scale spatial resolution and monitor specific protein localization at the stimulated cellsurface interface. We also use pair correlation function analysis and high resolution scanning electron microscopy (SEM) to investigate nano-scale plasma membrane heterogeneity of immuno-gold labeled proteins in intact, resting cells. Consistent with previous reports, we find that gold particles labeling cell surface proteins, as well as proteins randomly immobilized onto silicon surfaces, have clustered distributions. In contrast to previous reports, we demonstrate that this apparent clustering can be accounted for by multiple gold particles binding to individual target proteins. We provide further evidence of this artifact by measuring cross-correlations between two functionally identical, but distinguishable pools, of IgE-Fc[epsilon]RI or GM1. After correcting this artifact, we find that each of the six membrane proteins examined are distributed randomly at scales > ~15-20 nm but that IgE-Fc[epsilon]RI and Lyn show a slight tendency to co-associate. However, in cells stimulated with multivalent antigen, we find that IgE-Fc[epsilon]RI, Lyn, Syk, and LAT undergo rapid and dramatic reorganization (after accounting for clustering artifacts) and redistribute into large, stable clusters that may represent signaling platforms. At longer stimulation times, these clusters reduce in size as protein densities within clusters increases. In contrast to previous studies, our double label experiments show that Lyn rapidly associates with crosslinked IgE-Fc[epsilon]RI and remains co-clustered at long stimulation times. Additionally, we demonstrate that the stimulation dependent clustering of IgE-Fc[epsilon]RI and Lyn is sensitive to both cholesterol depletion and to Src family kinase activity, indicating that both lipid raftmediated and protein-protein interactions contribute to early signaling events.