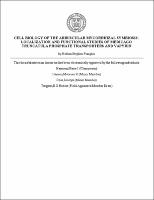 The arbuscular mycorrhizal (AM) symbiosis is an ancient, widespread and ecologically important mutualism between plants and fungi. This symbiosis is characterized by highly-branched hyphae called arbuscules that form within plant cells to facilitate mutually beneficial nutrient exchange. These structures are surrounded by a specialized plant membrane termed the periarbuscular membrane. In the legume Medicago truncatula, phosphate is taken up across this membrane by the phosphate transporter MtPT4, which localizes around arbuscule branches. The experiments described in this dissertation employ molecular genetic approaches together with a system to study fluorescent fusion proteins in live cells hosting arbuscules. In the second chapter, the periarbuscular membrane is revealed to contain distinct, complementary protein domains. In the third chapter, the mechanism of polar targeting of MtPT4 to the periarbuscular membrane is dissected by studying the localization of fluorescent protein tagged-membrane proteins expressed during different stages of arbuscule development. These experiments revealed that asymmetric localization of MtPT4 is mediated by precise temporal expression, coupled with significant and temporary changes in the direction and cargo selection of the plant secretory pathway for newly synthesized proteins. Together, these data point towards a surprising but logical mechanism for polar protein localization during the AM symbiosis and highlight the extent to which cells can become specialized during an intracellular biotic interaction. In addition, a mutant MtPT4 protein with a single amino acid change fails to localize in the periarbuscular membrane and instead is retained in the Trans-Golgi Network (TGN). This mutation causes a loss-of-function phenotype, confirming that localization of MtPT4 at the host-symbiont interface is required for its function. The fourth chapter describes additional M. truncatula phosphate transporters, one of which localizes specifically to the periarbuscular membrane. The fifth chapter reports discovery and characterization of a gene named Vapyrin. Knockdown of this gene impairs root penetration by AM fungi and abolishes arbuscule formation. Vapyrin is induced coincident with fungal infection, and encodes a novel protein containing a VAP (VAMP Associated Protein) domain and eight ankyrin repeats, both established protein-protein interaction domains. We hypothesize that Vapyrin functions in secretion during fungal infection through recruitment to an endosomal compartment.