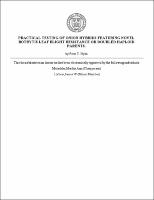 Onion (Allium cepa) is an important vegetable crop in the United States and worldwide. In 2009, ca. 103,960 acres of onions were harvested in the United States at an estimated value of nearly $473 million including the 10,000 acres harvested in New York, valued at $46 million (U.S. Department of Agriculture, 2009). Onion breeding has, for the last 60 years, focused largely on production of single cross hybrid varieties, created by crossing male sterile female lines with male fertile inbred lines. The shift from open pollinated varieties to hybrid varieties occurred in the 1950's after reports by Jones and Clark (1943) and Jones and Davis (1944) outlined how the cytoplasmic male sterility system allowed large scale production of hybrid seed, and demonstrated the significant increase in productivity of the resulting hybrids over standard open pollinated onion varieties. These hybrid varieties were adapted rapidly by onion growers, due to the increased yield (i.e. hybrid vigor) and uniformity. The creation of new male lines with novel beneficial traits for use in hybrid combination is a major strategy of onion breeding programs. When a desired trait, such as disease resistance, cannot be found in a crop species, it must be transferred from a related wild species through inter-specific crosses. Resistance to Botrytis leaf blight (BLB) was transferred to onion A. Cepa through inter-specific crossing with Allium roylei and backcross breeding. Another procedure used to develop homozygous inbred lines in crops such as maize, rice and Brassicas, is the creation of doubled haploid inbred lines. Trial results of two types of inbred lines, created using both inter-specific backcross breeding and doubled haploids, are presented. Two onion lines 07-801 (BC2F3) and 07-808 (BC1F3), resistant to Botrytis squamosa (Walker 1925) causal agent of Botrytis leaf blight (BLB), were produced through inter-specific backcross breeding to introgress the resistance gene Bs1 from A. roylei to A. cepa. BLB resistance levels of these lines were compared in inoculated trials with the susceptible commercial variety Festival. Four evaluations, the two in the greenhouse and two in the field, found these lines to be significantly more resistant the susceptible control Festival. In non-inoculated trials in commercial fields Bs1 heterozygous hybrids, created by crossing the resistant inbred line 07-801 with a susceptible female, were intermediate in BLB resistance. They showed disease levels that differed significantly in resistance from both the resistant male line and susceptible female. In an inoculated greenhouse trial with multiple B. squamosa isolates, the homozygous Bs1 male, heterozygous Bs1 resistant hybrid, and susceptible female had a similar pattern of resistance as that seen in the field. The inbred lines 07-801 and 07-808 could be used as males in hybrid combination to reduce yield loss due to BLB. The homozygous lines showed stronger resistance indicating that Bs1 is partially dominant and that using male and female parents, both homozygous for Bs1resistance, would create a more resistant hybrid. Twenty doubled haploid (DH) onion lines, produced from two different sources from the Cornell onion breeding program (Alan et al., 2003, 2004), were comparable in bulb weight with their source lines and Festival. Twentyfive DH hybrids, created using DH lines as males, were equivalent or significantly greater in bulb size and yield when compared with current commercial onion hybrids that share the same female parents. The ability of DH lines to be exceptionally productive, both as inbred lines and in hybrid combinations, may be attributed to the removal of deleterious sub-lethal genes that are fully expressed in the homozygous state during gynogenesis. These results suggest that doubled haploids could be used to both speed up that process of inbred line development and create higher yielding varieties.