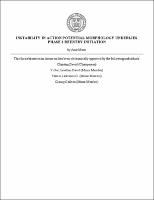 Phase-2 reentry (P2R) occurs when electrotonic current propagates from sites of normal notch-and-dome action potentials (AP) to loss-of-dome abbreviated AP sites, causing abnormal reexcitation. If sufficiently large and ill-timed, the secondary activation associated with P2R may initiate ventricular fibrillation and cause sudden cardiac death. AP heterogeneity consisting of the two AP morphologies, the notch-and-dome and the loss-of-dome, in adjacent regions is required for P2R development. Although P2R is well defined, the mechanisms underlying its initiation and the factors determining its development are still unknown. In this computational modeling study, a number of aspects of P2R initiation were explored. In the first part of this study, P2R development within the right ventricle epicardium was investigated using a systematic approach exploring homogeneous and heterogeneous one-dimensional cables. As expected, notchand-dome morphologies were produced when the inward current overwhelmed the outward current while loss-of-dome morphologies were produced when the opposite occurred. However, when this fine balance was in an intermediate range, cells switched intermittently between a prolonged notch-and-dome morphology and the loss-of-dome morphology during constant pacing. P2R occurred in homogeneous and heterogeneous cable simulations, but only when a significant percentage of cells manifested this unstable "switching" behavior. In the second part of this study, P2R initiation was studied in the transmural direction. The ventricular wall is thought to be comprised of three distinct layers: the epicardium, the midmyocardium, and the endocardium. Myocytes from each layer exhibit different action potential morphologies. W e found that P2R occurred in onedimensional transmural cables where the epicardial end manifested the unstable AP switching behavior. The last part of the study combined the first two parts; i.e., the initiation and development of P2R in two-dimensional transmural tissue was investigated. It was found that P2R could develop in two-dimensional tissues, expanding and creating macroscopic reentry. A notable increase in P2R incidence in two-dimensional transmural simulations compared to one-dimensional epicardial and transmural simulations was demonstrated as well. Hence, we conclude that an important factor facilitating P2R is not the presence of two different morphologies in adjacent regions but rather a switching AP behavior in which cells switch intermittently between the two morphologies.