From Bad Brains To Afro-Punk: An Analysis Of Identity, Consciousness, And Liberation Through Punk Rock From 19772010 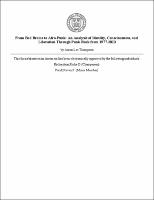 This thesis provides a critical study of African Americans in punk rock. It highlights the music and culture as forms of consciousness and liberation, providing an analysis of selected lyrics as a reflection of such awareness. The discussion of black punk music importantly delves into areas that traditionally have been examined in relation to black experiences in the United States, as well as ideas specific to punk rock experiences. Some of the pertinent inquiries are: How does black punk rock express a reaction to prevalent stereotypes of black people? Why and how might this music/culture be seen as "white"? Does the movement reflect a self-hatred, or does it contribute to liberation from prescribed roles for African Americans? What factors led to the rejection of rock and more specifically, punk rock, in the black community? What does this suggest for the future of black identification with punk and rock music? As the above questions are foundational ones, they serve as a guide for a thesis that investigates the notion of black identity with regard to music. This work examines the idea of punk rock not only as a form of self-love, but more importantly as an instrument for breaking the barriers of race-based generalization. Discussing the contributions of bands such as Bad Brains, The Objex, Whole Wheat Bread, and singer Tamar-kali, it analyzes the ways in which a non-mainstream music and culture both work to provide an environment that (re)defines blackness. Furthermore, it counters common surface-level assumptions that black punk rockers and audiences aspire to whiteness. By providing an explanation of the context in which punk rock was created, this thesis identifies African American influences and participants in the origins of punk rock. In addition, it conveys the messages of the genre through its own music, and addresses outside influences on its popularity.