Nitrogen Gas Fluxes In Northeastern Forests: The End Of The Line For Reactive Nitrogen? 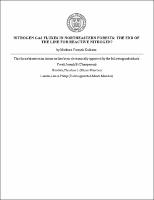 A long history of mystery surrounds the fate of nitrogen (N) deposited in northeastern forests. Budgets of N inputs, outputs and storages reveal a great deal of "missing" N on the output and storage side. Losses in leaching to groundwater and via streams do not account for the gap. Gaseous emissions from soils were discounted as the answer to this mystery after publication of studies that found low rates of nitrous oxide (N2O) and nitric oxide (NO) production. The fate of this missing N is of concern because fixed or "reactive" nitrogen (Nr)-all forms other than gaseous, inert N2-can transform and travel through system after system, polluting soils, air, and waters along the way in what is called the nitrogen cascade. In a series of studies on northeastern forests, I found that much of this missing N is lost as N2, effectively cutting off the cascade of Nr. I also measured N2O fluxes and our measurements corroborate previous observations of low rates. Moreover, relationships between fluxes and some potential controlling variables (e.g. N richness, moisture) were strong, allowing for spatially explicit extrapolation models. Uncertainties in our estimates of N gas loss remain, but improved methods for measuring and extrapolating fluxes promise to reduce these uncertainties. Still, evidence from these studies is strong that large portions of N inputs to northeastern forests are transformed into inert N2 and removed from the cascade of polluting Nr.