The Systematics Of Lithospermum L. (Boraginaceae) And The Evolution Of Heterostyly 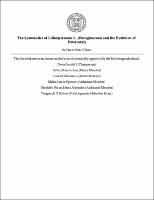