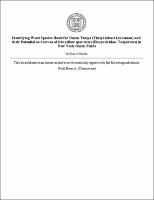 Onion thrips, Thrips tabaci Lindeman (Thysanoptera: Thripidae), is a pest of onion crops and other Allium spp. worldwide and is the only known vector of Iris yellow spot virus (IYSV) (Bunyaviridae: Tospovirus), a yieldreducing pathogen infecting onion. IYSV was first detected in New York onion fields in 2006 and has since been found throughout all of the major onion producing regions in the state. Recent studies in New York have shown that IYSV can reduce bulb size, suggesting that this disease may cause serious economic losses for the onion industry. Sources of IYSV in New York onion fields have only recently become better understood. IYSV may be annually introduced via transplanted onions imported from AZ, where the virus is established. IYSV also may be established in New York and bridge seasons through volunteer onion p lants and winter-annual, biennial and perennial weeds near onion fields. However, weed species that may be important in the epidemiology of IYSV in onion fields are not known. T. tabaci can only acquire IYSV as first instars. Therefore, a weed can only be a source for IYSV if it is also a host for immature T. tabaci. Because weed hosts that would support larval populations of T. tabaci were not known for the Great Lakes region of North America including New York, the main purpose of this research was to identify weed species that supported populations of T. tabaci larvae. In 2008 and 2009, common weed species and T. tabaci larvae were sampled from spring through early fall in the Elba Muck onion-growing region in western New York, the second largest onion growing region in the state. Ninety-eight weed species were sampled and 30 had at least one T. tabaci larva. A total of 2,121 T. tabaci larvae were found on weeds sampled in 2008 and 2009; 17% of the weed species were members of Asteraceae and 20% were in the Brassicaceae. Most of the larvae (90%) were found on species of these two families. Because IYSV is thought to be non-transmissible by seed, winterannual, biennial and perennial weed species have the ability to act as overwintering reservoirs for IYSV in onion cropping systems. Thus, these types of weed species may likely be the most important sources for this virus. Of the 30 weed species hosting T. tabaci larvae, 25 were winter-annual, biennial and perennial weeds. Of these, only four are confirmed hosts of IYSV: common burdock, Arctium minus, chicory, Cichorium intybus, curly dock, Rumex crispus, and dandelion, Taraxacum officinale. Among these four species, plant densities and populations of T. tabaci larvae were highest on common burdock and dandelion, suggesting that these weed species may have the greatest potential to impact the epidemiology of IYSV in New York onion fields. Densities of T. tabaci larvae were estimated to be 3,536 and 3,851 larvae per hectare on common burdock in 2008 and 2009, respectively, whereas densities were estimated to be 4,720 and 24,964 larvae per hectare on dandelion in 2008 and 2009, respectively. Larvae were only observed on curly dock in 2008 (3 larvae per hectare) and on chicory in 2009 (143 larvae per hectare). In a separate field survey in the fall of 2009, populations of T. tabaci larvae were highest on common burdock and dandelion plants adjacent to onion fields (0-50 m), whereas no larvae were observed on these weed species farther than 5 km from onion fields. Samples of common burdock and dandelion did not test positive for IYSV; however, the relative localization of T. tabaci populations suggests that management of these weed species near onion fields in an effort to reduce the number of viruliferous T. tabaci that may colonize onion fields warrants further investigation. In addition to IYSV, there are other important viruses of vegetable crops grown in muck soils. Survey results covering the presence of these weed species in the Elba Muck are presented and discussed.