The Systematics Of Dombeya Cav. And Its Near Relatives (Dombeyaceae) 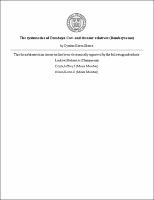 The species-rich and morphologically diverse genus Dombeya Cav. (Dombeyaceae) is a spectacular example of the remarkable diversity of the biota of Madagascar where evolution has followed a unique trajectory. Like other large genera, Dombeya remains a taxonomic hurdle in understanding the Malagasy flora. Over 5000 base pairs of sequence data from five noncoding plastid markers and ITS of Dombeya and relatives, including 87 accessions from 68 species and 10 genera, are used to investigate patterns of molecular evolution in Dombeya and hypothesize a phylogeny using parsimony and Bayesian methods. These results are synthesized with morphological observations and used as a means for evaluating the generic delimitation and infrageneric taxonomy of Dombeya. Plastid introgression is invoked to explain incongruence between closely related taxa in plastid versus ITS phylogenies. The topology of the combined analysis of all molecular regions generally corresponds with morphology and includes four major groups. The majority of the Malagasy species and all African species of Dombeya sampled form a monophyletic clade and are defined as Dombeya sensu stricto. A second clade includes winged-seed dombeyoids: the highly autapomorphic Eriolaena, Helmiopsis, Helmiopsiella and D. linearfolia. This molecular data and morphology support the transfer of D. linearifolia to Helmiopsis. A third, morphologically coherent clade of D. subsect. Macranthae plus D. moratii are consistently excluded from Dombeya s. str. in both plastid and nuclear phylogenies; these taxa are segregated from Dombeya as the new genus Andringitra. The fourth clade contains only Mascarene endemics: Trochetia, Ruizia, and a portion of the Dombeya from these islands. Differing relationships between these four groups in plastid versus ITS phylogenies suggest incomplete lineage sorting, possibly indicating the rapid divergence of these lineages. Molecular data provide little support for the infrageneric taxonomy of Dombeya. Revisionary work needed in Dombeya is begun with a study of section Astrapaea, a group distinguished by pendulous inflorescences and long staminal tubes. Broader species circumscriptions than those previously adopted are proposed because traditional taxonomic characters in the section overlap between species and sometimes vary within individuals or populations. One new species, D. gautieri, and one new subspecies, D. cannabina subsp. antsifotrensis, are described.