The Role For Ect-2 And Rho-1 In Polarization Of The Actomyosin Network Of The C. Elegans One-Cell Embryo 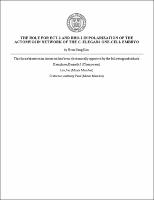 Asymmetric cell division plays a critical role in embryogenesis and organogenesis of multicellular organisms. In C. elegans, asymmetric divisions take place during the earliest stages of embryogenesis, generating 6 founder cells, each of which is responsible for development of a unique subset of tissues. During the first cell cycle after fertilization, the contractile actomyosin network on the cortex is locally down-regulated on the future posterior pole by an unknown cue associated with the centrosomes containing paternally provided centrioles. Due to the internal tension, the actomyosin network retracts toward the anterior, generating cortical and cytoplasmic flows that serve as the driving force for initial polarization of the zygote. I studied RHO-1, a Rho GTPase, and ECT-2, a RhoGEF protein that activates Rho GTPases, for their possible roles in polarization of the zygote. My data suggest that RHO-1 and ECT-2 are required for activation of the contractile actomyosin network, and local down-regulation of RHO-1 and ECT-2 on the future posterior pole in response to the polarizing signal is responsible for local down-regulation of the actomyosin network. I also determined that the C-terminal region of ECT-2 containing a membranetargeting domain and a C-terminal tail, but not the catalytic domain with guaninenucleotide exchanging activity, is necessary and sufficient for both cortical accumulation and transient local reduction of ECT-2. These data suggest that the guanine-nucleotide exchanging activity of ECT-2 is required for the full extent of posterior reduction, but not for cortical accumulation and initial reduction of ECT-2 in response to the polarizing signal. I also tested the physiological importance of the interactions between the anterior PAR proteins, PAR-3, PAR-6, and PKC-3, in collaboration with other members in the Kemphues lab. My data suggest that the interaction of PAR-6 and PKC-3 is required for proper distribution of PAR-6 in larvae and adults, and that PDZ2 domain of PAR-3 is partially required for accumulation of PAR-3 on the cortex, but fully required for cortical accumulation of PAR-6 and PKC-3.