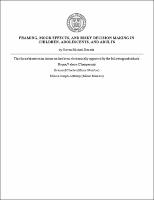 Risky decision making, and how it changes over the lifespan, is important for theory and public policy. Studies examining decision making from childhood through adolescence on to adulthood have rarely examined choice on the same task. However, this is crucial in order to fully understand the factors that affect decisions through development and to make defensible comparisons. A framing task was administered to groups of 2nd graders (n = 31), adolescents (n = 35), and adults (n = 41). Of interest is how factors affected choices between a sure option and an option that involved risk. In addition to choices, ratings were elicited on a 7-point smiley-face scale to indicate degree of preference. Factors that were examined include frame (gain, loss), risk (.5, .67, and .75), reward magnitude ($5, $20, and $150), induced and measured mood of the decision maker (positive, neutral, or negative), and the decision makers' optimism. Repeated measures analysis of variance revealed that participants chose the gamble option more when options were presented as losses versus when they were presented as gains (a standard framing pattern). Overall, participants chose the gamble most at the lowest risk level (defined as the probability of the bad outcome in the gamble), and chose the gamble less often as the reward magnitude increased. This effect was qualified by a reward magnitude by age group interaction. The decreasing trend in choosing the gamble was found only for adults and adolescents. The decrease in choices of the gamble as magnitude differences increased (favoring the gamble) is further evidence for fuzzy-trace theory's explanation that standard framing results from gist-based processing in adults. Children's opposite trend, favoring larger outcomes in the gamble, is consistent with fuzzy-trace theory's developmental prediction that younger subjects would be more verbatim processors. Negative mood was found to increase verbatim processing, indicated by an increase in reverse framing (greater preference for the gamble in the gain frame than in the loss frame, the opposite of standard framing). Participants in neutral and positive moods showed the standard framing pattern. Decisions were not found to be influenced by the level of optimism.