Engineering Enzyme Colocalization Within The Cytoplasm Of Escherichia Coli 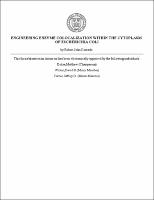 There is ever increasing interest in developing biological routes for the production of valuable chemicals, especially for those products whose current manufacture is from non-renewable resources or whose synthesis has proven difficult or intractable using traditional synthetic routes. One common approach to this problem is to harness the synthetic potential of living cells that carry engineered metabolic pathways. However, even after a functional biosynthetic pathway is created in a metabolically engineered microorganism such as Escherichia coli, many bottlenecks can ensue including (i) diverted metabolic flux away from the desired product, and (ii) accumulation of toxic intermediates that can inhibit host cell growth. This work reviews the entire history of engineered colocalized enzymes, both in vitro and in vivo, and posits the necessary components for successful engineered systems. Next, a stochastic multidimensional model was developed to study the impact of enzyme compartmentalization to measure the effect of increased local concentrations versus substrate diffusivity. As a first step to engineer these systems in vivo, fusion proteins and various post translational interactions were employed to improve the production of both 1,2-propanediol and 1,2,4-butanetriol in E. coli. The difficulty in resolving true synergy indicated the importance of independent colocalization techniques that would provide better engineering controls and permit multiple parameters for further optimization. In response, DNA scaffolds were developed to colocalize a series of sequential reactions along a plasmid DNA surface. This was accomplished for both 1,2-propanediol and mevalonate production in E. coli and resulted in 5-fold and 4-fold increases respectively. Future work is needed to further optimize these systems and understand the inherent complexity of coupled, multimeric enzymes. The use of synthetic DNA scaffolds in vivo provides a powerful new methodology that can be used alongside conventional engineering methods. In the long term, the possibility of integrating several of these strategies simultaneously to balance pathway flux, eliminate metabolic bottlenecks, reduce cell stress, and prevent accumulation of unwanted intermediates and/or byproducts could pave the way to produce commercially viable levels of diverse metabolic products such as biofuels, specialty chemicals and therapeutics.