Electroworming : The behaviors of Caenorhabditis (C.) elegans in DC and AC electric fields 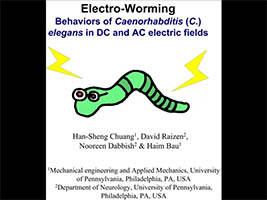 The video showcases how C. elegans worms respond to DC and AC electrical stimulations. Gabel et al (2007) demonstrated that in the presence of DC and low frequency AC fields, worms of stage L2 and larger propel themselves conscientiously and deliberately towards the cathode. Rezai et al (2010) have demonstrated that this phenomenon, dubbed electrotaxis, can be used to control the motion of worms. In the video, we reproduce Rezai's experimental results. Furthermore, we show, for the first time, that worms can be trapped with high frequency, nonuniform electric fields. We studied the effect of the electric field on the nematode as a function of field intensity and frequency and identified a range of electric field intensities and frequencies that trap worms without apparent adverse effect on their viability. Worms tethered by dielectrophoresis (DEP) avoid blue light, indicating that at least some of the nervous system functions remain unimpaired in the presence of the electrical field. DEP is useful to dynamically confine nematodes for observations, sort them according to size, and separate dead worms from live ones.