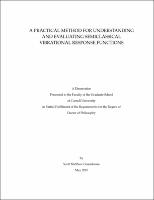 Vibrational response functions may be used to predict the results of linear and nonlinear spectroscopic measurements. As quantum response theory is numerically impractical for large systems and as classical response functions can be qualitatively incorrect, there is a need for a method to calculate spectroscopic response functions semiclassically. Previously, the semiclassical Herman-Kluk propagator has been applied to the calculation of the linear and third-order vibrational response functions. In this approach, the response function is expressed as multiple phase-space integrals over pairs of classical trajectories and their associated stability matrices. This procedure can be quantitatively accurate, but the calculations are computationally challenging due to a highly oscillatory semiclassical phase and a time-divergent prefactor. Here we analyze the structure of the semiclassical response function and discuss how the Herman-Kluk approximation is able to accurately describe quantum coherence effects. For coupled anharmonic oscillator systems, interference between pairs of classical trajectories results in a quantization condition on the classical action variables of the system. A pair of trajectories only contributes near phase space recurrences, and quantum coherence effects result from a summation over all possible recurrence topologies. By treating this interference analytically, we develop a mean trajectory approximation to the linear and nonlinear response functions that requires the propagation of classical trajectories linked by quantized transitions in action. This mean trajectory treatment accurately reproduces quantum coherence effects in the linear and third-order response functions for coupled anharmonic systems at a significant reduction of the numerical cost of full Herman-Kluk dynamics, and thus represents a practical method for the calculation of nonlinear vibrational response functions. For large systems such as biological molecules, semiclassical methods are currently impractical, but mixed quantum/classical techniques can be used for the calculation of response functions. We have implemented molecular dynamics simulations and a quantum/classical model to calculate the absorption and vibrational echo spectra for several spectroscopic states of carbonmonoxy horseradish peroxidase. While our simulations do agree with several experimental observations, our predicted spectra are not in good agreement with experiment, likely due to either an inaccurate force field or starting structures that are not fully at equilibrium.