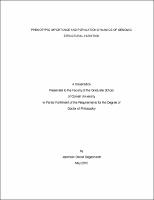 The fundamental goals of molecular genetic studies are 1) understanding how variation within an organism's genome translates into phenotypic differences and 2) how this variation segregates and becomes fixed within populations. An enormous amount of work has been invested in looking at point mutations, or single nucleotide polymorphisms (SNPs). However, far less work has been devoted to studying larger structural variation (SV). Advances in molecular techniques (i.e. PCR, Sanger sequencing, genotyping arrays and comparative hybridization arrays) have greatly expanded our ability to detect these larger mutations. Here, I focus on developing methods for the analysis of data generated using these techniques and apply these methods to several data sets to broaden our understanding of the role of SV in genome evolution as well as the phenotypic consequences of this variation. Specifically, I first develop a method for the detection of a particular type of SV, known as copy number variation (CNV). This method is applied to genotyping array data collected from domestic dogs. I analyze these data to detect the extent of CNV in domestic dogs and their close relatives and to better understand population genetics and evolution of CNV. The analysis reveals nearly 10,000 CNVs segregating in domestic dogs and covering nearly 400 Mb of the dog genome. Next, using a retrospective study design, I investigate the role of CCL3L CNV in the progression rate to simian AIDS in rhesus macaque. I find strong evidence that reduced copy number of CCL3L increases progression rates in rhesus macaques. This is a similar finding to that seen in humans in an earlier study. Therefore, rhesus macaque is a promising model organism for understanding how CCL3L CNV is affecting HIV progression in humans. Characterizing the role of CCL3L CNV will allow researchers to increase power in vaccine trials by controlling for this natural variation. Finally, I introduce a novel method for mapping the pseudoautosomal region in mammalian genomes. I apply this method to data collected from domestic and wild canids as well as rhesus macaque and use the results of this study to further the understanding of PAR evolution across the mammalian tree.