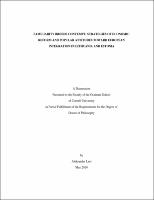 In referenda held in 2003, more than ninety percent of Lithuanians supported joining the European Union (EU), while fewer than two-thirds of Estonians did so. Why? The small existing literature on cross-national differences in EU support has focused on political and cultural variables, such as party competition and the history of independent statehood. Using survey data and content analysis of newspapers, however, I show that Lithuanians and Estonians had different economic expectations about the EU. Most Lithuanians hoped that joining the EU would help Lithuania to catch up with the West by increasing foreign investment and trade. By contrast, many Estonians worried that the accession would make their country dependent on the West by driving domestic producers bankrupt and allowing foreigners to buy up local economic resources. Based on statistical data and press reports, I argue that these expectations reflected the two countries' strategies of economic reform. Lithuania sold state-owned enterprises (SOEs) to their managers, imposed moderate tariffs on imports, and continued to trade heavily with Russia. This strategy slowed down the development of services and modern industry. By contrast, Estonia sold SOEs to foreign investors, abolished all tariffs, and reoriented its trade rapidly to the West. This approach hurt agriculture and traditional industry. As a result, both Lithuanians and Estonians were unhappy about their country's economic situation. However, Lithuanians saw European integration as a solution to their country's problems, while Estonians considered it a cause thereof. I conclude by showing that my theory "travels" to Slovakia and the Czech Republic.