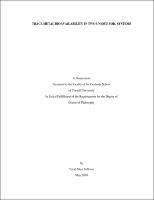 It is widely understood that soil microbial communities control nutrient cycling, trace metal biogeochemistry and bioavailability in both aquatic and terrestrial systems, but the underlying mechanisms are not entirely clear. The objective of this work was to describe the microbial community composition, dynamics, and mechanisms controlling heavy metal biogeochemistry in the rhizosphere of purple willow (Salix purpurea L.) growing in the heavy metal affected circum-neutral histosols of Elba, NY, as well as to explore microbial metal mobilization in the African dust deposited on Trinidad and Tobago, West Indies. After extensive site characterization examining both spatial and temporal biogeochemistry of sulfur (S), zinc (Zn), cadmium (Cd), and copper (Cu) at the Elba site, I focused on the composition of the willow rhizosphere microbial community and specific activities leading to enhanced metal mobilization. Cloning of the 16S rRNA gene revealed a diverse and uniquely adapted microbial consortium present in the S. purpurea rhizosphere included members of Acidobacteriales, Actinomycetales, Planctomycetales, Verrucomicrobiales, Myxococcales, Sphingobacteriales, as well as members of Alpha-, Beta-, and Gammaproteobacteria. Culture-based techniques yielded a large proportion of isolates belonging to Bacillales, but also revealed members of Actinomycetales, Xanthomonadales, Pseudomonadales, and Burkholderiales to be contributing to heavy metal mobilization via siderophore production. In Trinidad and Tobago, I utilized the African dust microbial culture collection of the University of the West Indies to quantify the proportion of organisms capable of producing siderophores and thereby releasing bioavailable iron (Fe) into downwind ecosystems. I found that roughly 65% of organisms collected during African dust events produced siderophores, and all classes of siderophores were detected. The proportion of siderophore-producing isolates in Elba and in African dust was similar, and greater than in other reported soil systems. Increased siderophore production could be a result of heavy-metal stress; in the soils of Elba, Zn, Cd, Cu are inherently high, while in the African dust, typically Cu and molybdenum (Mo) are enriched. In these unique and disparate soil systems, microbial siderophore production appears to be shared mechanism for selective heavy metal mobilization or immobilization, demonstrating a powerful means by which soil microorganisms may impact biogeochemistry around the world.