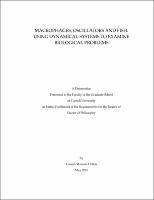 Dynamical systems techniques are used to examines three biological questions including macrophage activation, coupled oscillators and decision making in fish schools. Macrophages are fundamental cells of the innate immune system. Their activation is essential for such distinct immune functions as inflammation (pathogen-killing) and tissue repair (wound-healing). An open question has been the functional stability of an individual macrophage cell: whether it can change its functional profile between different immune responses such as between the repair pathway and the inflammatory pathway. We studied this question theoretically by constructing a rate equation model for the key substrate, enzymes and products of the pathways; we then tested the model experimentally. Both our model and experiments show that individual macrophages can switch from the repair pathway to the inflammation pathway but that the reverse switch does not occur. We analyzed the periodically forced Kuramoto model. This system consists of an infinite population of phase oscillators with random intrinsic frequencies, global sinusoidal coupling, and external sinusoidal forcing. It represents an idealization of many phenomena in physics, chemistry and biology in which mutual synchronization competes with forced synchronization. In other words, the oscillators in the population try to synchronize with one another while also trying to lock onto an external drive. Previous work on the forced Kuramoto model uncovered two main types of attractors, called forced entrainment and mutual entrainment, but the details of the bifurcations between them were unclear. Here we present a complete bifurcation analysis of the model for a special case in which the infinite-dimensional dynamics collapse to a two-dimensional system. Exact results are obtained for the locations of Hopf, saddle-node, and Takens-Bogdanov bifurcations. The resulting stability diagram bears a striking resemblance to that for the weakly nonlinear forced van der Pol oscillator. Many types of fish travel in schools where they cooperate on activities such as foraging for food and avoiding predators. In the past, it was believed that such group actions were dictated by a small number of informed leaders but recent evidence has shown that strictly local interactions can be responsible for cohesive group dynamics. Using an ODE model, we investigated the ability of a group of fish to make an accurate decision when portions of the group have conflicting information. Beyond the disparity of information, it is not known which individuals have which information. We modeled fish schools where a portion of the school believed food was in one location and another equalsized portion of the school believed the food was in another location. We found that the ability to make an accurate decision (locate food) required that some individuals "forget" or ignore their information. Without the loss of information by some individuals there was no ability to make a consensus decision.