Exploring The Evolutionary History Of Cultivated Rice: The Origin And Evolution Of Fragrance And The Genetic Control Of Black Hull Coloration 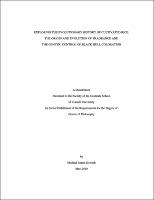 Cultivated Asian rice traveled a long and complex journey from a low-yielding, weedy grass species to the high-yielding staple crop consumed by billions of people today. This journey, driven by human selection, involved a series of genetic changes that transformed the rice plant in many profound ways. Modern genetics and genomics techniques have made it possible to re-trace the history of rice domestication and evolution. This new knowledge not only renders a clearer picture of the evolutionary paths traveled during rice domestication, but it also provides new insights for plant breeders, who are faced with the challenge of feeding an ever-growing human population. This dissertation examines the current body of knowledge pertaining to rice evolution, and in the process, attempts to improve our understanding of the genetic diversity within Oryza sativa and its wild progenitor, Oryza rufipogon. An indepth haplotype analysis is presented to reveal the origin and evolution of fragrance in rice, which remains one of the most important grain quality characteristics from the perspective of both the international export industry and indigenous peoples who have treasured this trait for centuries. The evolutionary history of the major allele responsible for fragrance in most modern varieties, badh2.1, is investigated, as well as the origins of several novel fragrance-causing alleles of BADH2 in unique rice germplasm from across Asia. Also, in an effort to further our understanding of the rice domestication syndrome, a genetic mapping study is presented that identifies the causal mutation responsible for a fundamental change during rice domestication: the loss of black pigmentation from the outer covering (hull) of the rice seed. A striking genetic phenomenon is revealed, in which the black hull trait is found to be controlled by an epistatic relationship between two physically linked genes.